Rogue is the new car series launched by Nissan. Check out the review and information on the features & technical specifications of Nissan Rogue.

Nissan had unveiled a compact crossover SUV in auto shows in 2007, by the name Rogue, as a 2008 model. The latest model of the chic car has received accolade among the car connoisseurs worldwide. Rogue offers some standard as well as exotic features to woo the customers. While other cross-over SUVs offer V-6 power, Nissan Rogue comes equipped with four-cylinder engine. The exteriors of the car are really impressive, exhibiting aggression, sophistication and sporty attitude, simultaneously. Rogue should not be mistaken to be an off-road commuter, because the luxury SUV is specially designed for the daily commuter, to cruise on city and highway roads. All in all, Nissan Rogue is a combination of fuel efficiency, stunning looks and impressive performance.

Engine
The all-new Nissan Rogue comes equipped with QR25DE 2.5-liter DOHC 4-cylinder gasoline engine, which churns out a power of 170 hp at 6000 rpm, with a peak torque of 175 lb-ft at 4400 rpm. The advanced lightweight engine fetches you a decent mileage too. The smooth handing of Rogue is attributed to its Continuously Variable Transmission (CVT). Through the advanced All-Wheel Drive (AWD) system, optimum amount of power is sent to front and the rear wheels of Nissan Rogue. This gives confidence and a sense of control over the crossover, to the person driving it.
Design and Interiors
The looks of Nissan Rogue are sleek and masculine, with dynamic arches and powerful lines. Its body is made of high strength steel, which makes it light. Moreover, it provides ample rear seat proportions, longest interior lengths as well as large front door openings. The car is aided with dominant Xenon headlights, power sliding glass sunroof and roof rail system. The interiors, no doubt, match well with the exteriors. Its luxury sedan-like manners sets it apart from other vehicles in its class.
Safety
The advanced All-Wheel Drive system of Nissan Rogue enables a strong hold on slippery roads. It also features standard Vehicle Dynamic Control (VDC), with Traction Control System (TCS). In addition, there is responsive steering, provided by an Electric Power-assisted Steering (EPS) system. Rogue also offers standard safety features, such as Advanced Air Bag System (AABS), which contains six standard air bags and occupant classification system for the front passenger seat, and front seat Active Head Restraints. It even provides excellent side-impact crash safety to its passengers. In order to avoid accidents, Nissan Rogue is equipped with Electronic Brake Force Distribution (EBD).
Variants
Nissan Rogue is available in three variants - S, S with 360 degrees Value Package and SL.
Technical Specifications 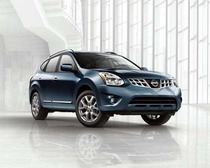