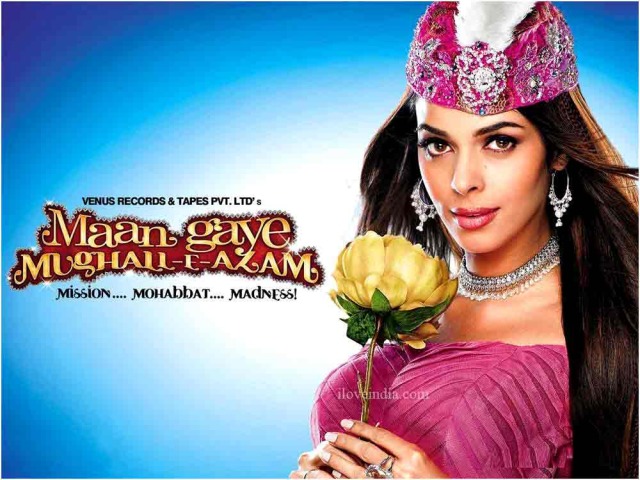 Director: Sanjay Chhel
Producer: Ganesh Jain, Ratan Jain
Banner: Venus Records & Tapes
Music Director: Anu Malik
Lyricist: Sanjay Chhel
Cast: Rahul Bose, Paresh Rawal, Kay Kay Menon, Mallika Sherawat, Pawan Malhotra, Zakir Hussain
Release Date: 22nd August 2008
After watching Maan Gaye Mughal-E-Azam, we sincerely wish we could have said 'Maan Gaye Sanjay Chhel'. Alas, this could not happen as we found hardly a few scenes in the movie that could be classified as 'worth-appreciating'. First of all, 'Maan Gaye Mughal-E-Azam' is one of those loud comedies that we have left far behind. If that wasn't enough, the continuity in screenplay is seriously lacking in the movie.
Though the writer has tried to add a punch to every single line in the film, there are many times when the humor falls totally flat. The story is not strong enough and on top of that, there are irrelevant songs in the movie that make no sense at all. Crisper editing and somewhat more competent direction was surely the need of the hour here. How did the director manage to bring out so loud performances from such brilliant actors, is a question we still have no answer to.
Paresh Rawal, though pretty loud, serves as the only saving grace of the film. Moving on to Mallika Sherawat, she hardly knew acting before also, but this time even her cleavage failed to create any ripples. Kay Kay Menon was completely miscast in the movie, while Pavan Malhotra was wasted. However, what we were left wondering is how could the much-talented Rahul Bose be in such a movie. By the way, why was Tanaaz Currim trying to pull off a Punjabi accent?

Maan Gaye Mughal-E-Azam Pre-release Review
The pair of Rahul Bose and Mallika Sherawat is back to entertain the audience once again, with the film ‘Maan Gaye Mughal-E-Azam’. An out and out comedy, the film is directed by Sanjay Chhel and will be released on 22nd August 2008. It has been produced by Ganesh Jain and Ratan Jain, under the banner ‘Venus Records & Tapes’. While Anu Malik is its music director, Sanjay Chhel has provided the lyrics. The star cast of the film includes Rahul Bose, Paresh Rawal, Kay Kay Menon, Mallika Sherawat, Pawan Malhotra and Zakir Hussain.
‘Maan Gaye Mughal-E-Azam’ is set in the background of the year 1993, when the demolition of Babri Masjid shook the roots of India. The communal riots that were a result of the demolition caused great damage to the country and its secular image. During this time, we are taken to a small town near Goa, known by the name of St. Louise. The coastal town is being used for smuggling in things like RDX and Arms and has been put on high alert, with Police, CBI and raw officers being stationed there.
There exists a theatre group in St. Louise, known by the name of Kalakar Theatre Company. It comprises of a group of actors who love their work, but are tired of doing the same age old period play 'Mughal-E-Azam' every time. Life is going on smoothly, rather blandly, for them and they are busy in their own dreamy world of acting. This bliss comes to an end when they come to know about the plan of an underworld don, of creating havoc in the country by causing severe bomb blast.
This is when their life takes a different turn and they go on an amusing and adventurous roller-coaster ride. All the members of the drama company devise a ‘deadly game plan', to save the country from the tremors of the bomb blast. What follows is a riot of laughs, as they perform multiple roles in disguise. In the end, they do manage to save the nation from the devastating bomb blast, but not before creating numerous funny situations. ‘Maan Gaye Mughal-E-Azam’ is the story of reel life stars becoming real life heroes.