Nail fungus is one of the most common fungal infections and if not taken proper care, the nails can even fall off. Read below to learn how to get rid of nail fungus.

How To Get Rid Of Nail Fungus

Yellow, cracked, and smelly, in short, disgusting nails would attract the same reaction as when a finger is inserted inside the throat. Not to mention that nails with fungal gardens can very well take the sheen out and make the overall effort to look good go in vain. Gloves and socks can temporarily save your day, but if you want your nails to play an important role in making you look tidy and clean then you will have to look for a permanent solution to the fungal infection. The best is, of course, to work on getting rid of nail fungus as soon as you see them so that you do not allow the fungus to spread further. And nail fungus should not be any cause of alarm, unless you are careless enough to let it get very severe. There are many antimicrobial and antifungal creams that you can avail of, but in most cases the results are not as effective as the various remedies using household ingredients. Given below in the article are some of the remedies that you can use to get rid of nail fungus. 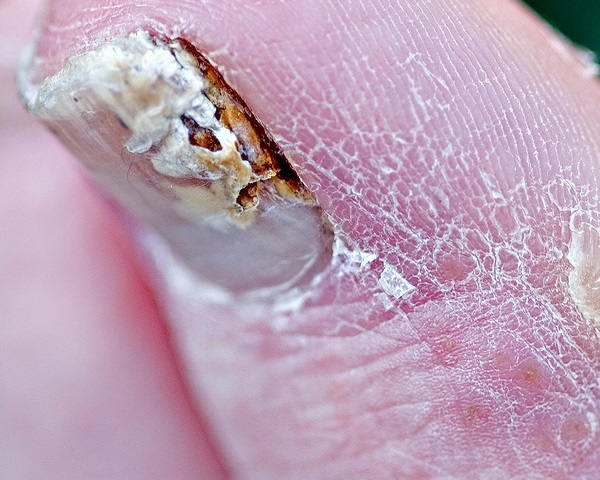 Apple Cider Vinegar
Apple Cider Vinegar is a very popular remedy to get rid of nail fungus. Wash the hands and feet and apply vinegar twice a day on the nails. If the nail fungus is very severe, then soak the nails in a mixture of vinegar and water. The acetic acid in vinegar is very effective in stopping the growth of fungus.

Mouthwash And White Vinegar
Take a bowl large enough to soak your nails. Into this bowl mix equal parts of white vinegar and mouthwash and soak the nails for 15 minutes. Do this at least twice a day. You can also soak a cotton ball in the solution and apply it on the nails.

Lavender, Tea Tree, And Olive Oil
Mix equal amounts of lavender oil, olive oil and tea tree oil and lightly warm them. Now soak a cotton ball in the solution and at least two times a day, dab it under the top edge of the nails. The antibiotic and antiseptic properties of these oils will fight the fungal infections and also prevent skin irritations.

Olive Oil And Oregano Oil
Mix one teaspoon of olive oil with two drops of oregano oil. Dab this mixture on the affected nails three times a week. The antifungal properties of oregano will control the growth of fungus and gradually get rid of them.

Turmeric Powder
Take turmeric powder and add a little bit of water. Form a paste and apply it on the affected nails. Allow the paste to dry completely and then wash with warm water. Dry the nails thoroughly after that.

Nail fungus is a very common and persistent problem and so it is very necessary to learn how to get rid of fungus. Resort to any of the above listed home remedies and treat nail fungus effectively at home.