Daniel Craig is an English actor, who is presently portraying the character of James Bond. To know more about his childhood and profile, read the biography given below. 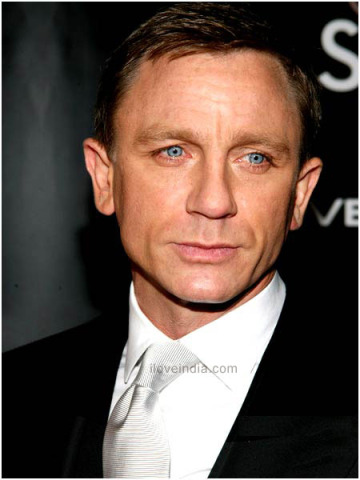 Born in: Chester, England
Nationality: English
Career: Actor
Daniel Craig is an English actor, who has done some remarkable Hollywood films. Before being a successful film actor, Craig had a thriving TV career. As a result, he appeared in a number of TV series including, ‘Sharpe's Eagle’ and "The Young Indiana Jones Chronicles: Daredevils of the Desert." His breakthrough roles were provided by the films ‘Layer Cake’ and also ‘Lara Croft: Tomb Raider’. Craig has recently become the sixth acclaimed actor to play the fictional secret agent James Bond in the long-running Eon Productions film series. He made his debut as James Bond in the film, ‘Casino Royale’, released in 2006. Apart from critical acclaim, Daniel Craig was nominated for a BAFTA award for the same.
Childhood
Daniel Craig was born as Daniel Wroughton Craig on 2 March, 1968 in Chester England. His mother Olivia (née Williams) was an art teacher and his father Timothy John Wroughton Craig, served as a midshipman in the Merchant Navy. The actor grew up on the Wirral, Merseyside, as his father was landlord of the ‘Ring 'O Bells’ and ‘The Boot ‘pubs. The actor went to Hilbre High School and Calday Grange Grammar School in West Kirby. Daniel even played for Hoylake Rugby Club. At the age of sixteen, Craig moved to London to join the National Youth Theatre. He is also the cousin of novelist Joe Craig.
Early Life & Career
Daniel studied at the Guildhall School of Music and Drama, finally graduating in 1991. After this, he appeared in several minor roles including ‘Sharpe's Eagle’ and an episode of ‘Drop the Dead Donkey’ in 1993. In 1996, he did his first leading role on screen, as a co-star in the BBC Television serial ‘Our Friends in the North’. Continuing his work with the BBC, he starred in the Francis Bacon biopic ‘Love Is the Devil: Study for a Portrait of Francis Bacon’ in 1997, portraying Bacon's jilted lover George Dyer. In the same year, he also appeared in a TV mystery drama, ‘The Ice House’ from the Minette Walters novel.
Breakthrough
Daniel Craig plunged into the Hollywood film industry as Angelina Jolie's rival and love interest in ‘Lara Croft: Tomb Raider’ in 2001. In 2002, he continued his career in the United States, working in Sam Mendes's movie, ‘Road to Perdition,’ along with Tom Hanks and Paul Newman. After this, Craig did a number of successful films such as Sword of Honour (2001), The Mother (2003) with Anne Reid, Sylvia (2003) with Gwyneth Paltrow, Layer Cake (2004) with Sienna Miller, Enduring Love (2004) with Rhys Ifans, Steven Spielberg's Munich (2005), and Infamous (2006).
The Bond
In early 2005, Craig was nominated as the next James Bond by the media. Following this in the end of the year, Craig signed a three film contract with the EON Productions. Though there was some controversy associated with the same, his first film as the Bond, ‘Casino Royale’ was released on 14 November 2006, and grossed a total of US$594 million, making it the highest grossing Bond film ever. His performance was highly applauded and in effect he was nominated for a BAFTA Award for Best Actor on January 2006, and won the Best Actor award at the Evening Standard British Film Awards on 2 February 2007.
Personal Life
Craig married Scottish actress Fiona Loudon, in the year 1992. Though the couple has a daughter, Ella, the marriage ended in a divorce in 1994. After his divorce, Craig was involved with German actress Heike Makatsch and continued to be in the relationship for seven-years, after which it ended. For the past few years, Craig has been in a long term relationship with Japanese American film producer Satsuki Mitchell.
Filmography
1992 - The Power of One
1993 - Sharpe's Eagle
1995 - A Kid in King Arthur's Court
1996 - The Fortunes and Misfortunes of Moll Flanders, Our Friends in the North
1997 - Obsession - Besessene Seelen
1997 - The Ice House
1998 - Love Is the Devil: Study for a Portrait of Francis Bacon, Love and Rage, Elizabeth
1999 - The Trench
2000 - Some Voices, I Dreamed of Africa
2001 - Lara Croft: Tomb Raider, Sword of Honour
2002 - Copenhagen, Ten Minutes Older: The Cello, Road to Perdition
2003 - Sylvia, The Mother
2004 - Layer Cake, Enduring Love
2005 - Munich, Archangel, Fateless, The Jacket
2006 - Casino Royale, Renaissance, Infamous
2007 - The Golden Compass, The Invasion
2008 - Flashbacks of a Fool, Defiance, Quantum of Solace (post production and filming)
2009 - I, Lucifer (on hold)
2010 - Bond 23 (announced)
How to Cite