BMW X5 Vision is a hybrid SUV, which was unveiled at the 2008 Geneva Auto Show.

Gone are the days of gas-guzzling SUVs. With spiraling oil prices and stricter emission norms in place, big-car automakers are hard-pressed to justify their large SUVs. One such SUV is the BMW X5 which has been revived in a new avatar-concept appropriately titled ‘Vision’. The new X5 Vision EfficientDynamics Concept, which premiered in the Geneva auto show, is a mild ActiveHybrid of diesel and electric and is a sign of BMW’s commitment to reduce emissions and improve the mileage of their vehicles. It will be the most fuel efficient SUV when it hits the showrooms.

Design & Comfort
The X5 Vision shares the same body as the older X5s. The difference lies in the aerodynamically-efficient 19-ich light alloy wheels with reduced ventilation. This design reduces air-resistance which makes a big difference when the car is plying through at high speeds. The Vision features the same chassis and ride height as the X5 and is speculated to have similar comfy leather interiors and large cabin spaces.
Engine
The new X5 hybrid’s engine garners much attention as it is the defining element of the new SUV. It is a hybrid turbo-diesel/electric engine that is basically a twin-turbocharged 2.0litre, four cylinder mated to a small electric motor generator that is mounted directly into the gearbox. The diesel engine is rated at 201 hp while the small electric one outputs a tiny 20hp to give a combined total of over 220hp. The turbo diesel engine produces a torque of about 400Nm @2000rpm while the puny electric engine outputs a decent 210 Nm of torque. The two engines however reach their torque peaks at different rpm and as such should give a steady balance throughout the rev-range.
Other efficient measures BMW has incorporated include Brake Energy Regenration (BER), the alternator which is integrated into the crankcase instead of being driven from the front of the engine and solar panels where the sunroof should be to help in pre-warming of the transmission fluid. The power that is generated from the BER is stored in Li-Ion batteries and this energy is used to power the air conditioner, electric coolant pump and the electric power steering system.
Finally, the engine is mated to an eight-speed automatic transmission which also helps improve, although indirectly, the fuel efficiency of the SUV. On the environmental front, all these additions reduce the emissions and hence the carbon foot-print of the driver and passengers. The engine promises to give a mileage of around 20kmpl! which easily beats many small petrol engine cars.
Safety
Presumably, like the older X5s and just about any other SUVs, the X5 Vision will incorporate antilock brakes, traction control and brake assist for extra braking power during emergencies. The package must also include airbags that will provide cushion from the front and sides.
Variants & Price
Still at the concept stage, there is only one variant of the X5 Vision that may cost around the same as an older X5, probably in the vicinity of USD 80,000 or over Rs.35 lakhs.
Technical Specifications 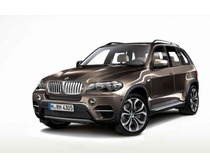