Vienna is known the world over for its beautiful structures and has many places to see. Check out fun things to do in Vienna. 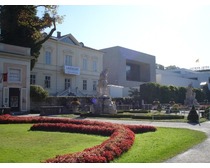