Find reviews on the Sony Ericsson K800i cyber shot mobile phone and its price/cost in India.

Here is a treat for all those who love to click with their cell phones. Out of all the camera phones available, the best is now available. It is almost like a digital camera which works as a cell phone! The Sony Ericsson k800i is an intelligent amalgamation of your digital camera and MP3 player as well as a mobile phone. The sleek looking cell phone has a 3.2 mega pixel Cyber-Shot camera with auto-focus and a bright xenon flash. It is also equipped with an impressive package of a music player, 3G video calling, expandable memory and wireless Bluetooth connectivity.

Looks
The first 3G phone in Sony Ericsson’s Cyber Shot range, the K800i does not fail to impress. In fact, it was touted as the best camera phone available in UK when it was released. That is quite an honor for a cell phone and the k800i truly deserves it. The phone looks beautiful and sleek; the styling is a unique blend of traditional and modern, but due to the features and the camera it becomes a bit heavy. The camera lens is protected with a sleek sliding lens cover, which sometimes tends to slide off on its own, activating the camera.
Features
The keypad is user-friendly and is ergonomically built, though it takes time for a new user to get used to the slightly hard keys. The screen measures 2 inches and enables crystal-clear viewing. Though the phone is heavy, it is for the better since there is less shake, which allows the picture quality to be really good. The cell phone has a real Xenon flash that reduces the chances of red eye and gives clear image in less light. An impressive feature of the phone is the function called BestPic. This allows you to click nine pictures at a time and then choose the best one out of them. The video camera is a bit less impressive than the still camera and there is an additional video camera for video-calling.
The k800i is equipped with an impressive music player along with stereo FM radio. The sound quality is quite good and can be heard over a wireless headset with the help of Bluetooth. A genuine all-rounder phone, you can experience 2 way-video calling, multi-tasking, sophisticated web browser, quick music and video downloads and useful business applications such as emails. There is also an option of photo blogging on the phone. The memory is expandable by adding a 1GB memory card yourself. The phone is excellent when considering its price, connectivity and battery life.
Features of Sony Ericsson K800i 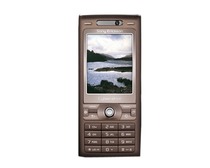