The Prada phone is finally available in India, but was not launched by LG, as scheduled. Find out Prada mobile price/ cost & accessories.

When technology meets an icon of fashion, the result is a stylishly designed cell phone that has state-of-the-art functions. Sounds like a winner! It has got to be! After all, we are talking about the new Prada phone, which is one of the earliest touch-screen mobile phones. The launch of Prada phone was first announced on 12th December 2006. Its images appeared on the websites by 15th December, 2006. Finally, on 18th January, 2007, the official press release was issued, which contained the image of the phone. Now, the sleek and stylish cell phone is for all to see!

Design
Prada phone has been made by paying full attention to the minute details about the appearance and features. It is sleek and simple in style, which caters to the stylistic norm of the day. It is a small phone and fits into the pocket easily, makes it extremely handy. The main menu of the mobile has been arranged in the form of tabbed folder pages that are full of icons. The icons are simple and can be easily understood by people of any age. It is a highly impressive phone, with a well-designed feature set.
Features
The KE 850 Prada phone has a 2 mega-pixel camera and a sleek touch screen. The TFT touch screen has its resolution at 240 x 400 pixels, ranging up to 3 inches. The phone looks very sophisticated. In fact, in the shiny black color, it looks no less than royal. The document viewer supports Word, Excel and PowerPoint files, PDFs and text files also. It consists of an Abode Flash UI and has the capacity of music multitasking. The mobile phone consists of a video player with MPEG4, H.264, and H.263. It has an internal memory capacity of 8 MB. It boasts of an external memory slot that enable the user to add to the capacity of the memory for storing music, images and film clips.
Technical Specifications 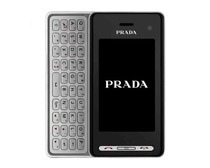