The High Tech Computer Corporation (HTC), which is one of the fastest growing companies in the global mobile device market, recently declared the introduction of its new HTC Touch Dual. Being positioned as a fresh and more powerful constituent of the Touch family, the HTC Touch Dual incorporates 3.5G wireless connectivity together with a really chic and original sliding keypad design. The HTC Touch Dual can be bought from all leading authorized retail outlets at Rs. 29, 900.

HTC Touch Dual upholds the company’s tradition of introducing an extra degree of ease to this powerful gadget also. Moreover, this smartphone promises to provide a rich device experience which the mobile users of the present generation desire. However, it is via getting inspired by a design idea from the trendy HTC Touch that the HTC Touch Dual has incorporated the 3.5G wireless connectivity and a sliding keypad into a stylishly slim instrument crafted for smooth typing.
The new HTC Touch Dual phone happens to be the second gadget to join HTC’s TouchFLO family. It, thus, comprises the similar gesture-recognition feature as that found in the original Touch. However, one will also find impressive new functionalities like capacity to see photo slideshows via on-screen controls and to flip images with hand. The new device from HTC also permits its users improved finger touch scrolling and facility to go through web pages, documents, messages and contact records.
Technical Specifications 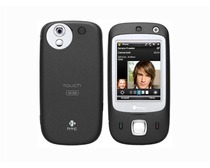