Sikkim is a small state, tucked away in the north-eastern corner of India. Read this article to know about the numerous tourist attractions i.e. places to see in Sikkim.

Sikkim is one of the north-eastern states in India, which are collectively known as the ‘Seven Sisters’. Situated amidst picturesque beauty and bewitching locales, Sikkim is counted amidst the smallest states of the country. However, this does not lessen the magnificence of the state even slightly. Adorned with soaring mountains and tranquil lakes, Sikkim lures visitors from various parts of the world. The rich geography of the state is made up of snow-capped peaks, lush green valleys, gushing rivers, steep gorges and exotic flora. Home to the majestic Mt. Kanchenjunga, Sikkim also has a number of monasteries that seem to fill its atmosphere with spiritual calm. 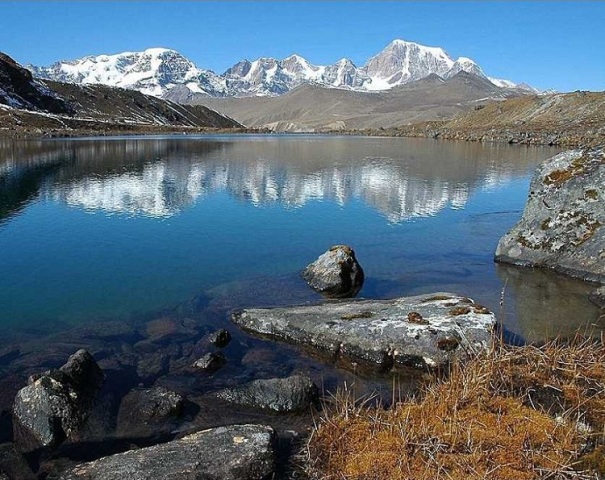 Image: By Carsten.nebel (Own work) [GFDL (http://www.gnu.org/copyleft/fdl.html) or CC-BY-3.0 (http://creativecommons.org/licenses/by/3.0)], via Wikimedia Commons
Places to See in Sikkim
Though Sikkim is not spread over a very vast area, it nonetheless surprises you with its wide range of tourist attractions.
Gangtok
The capital city of Sikkim, Gangtok is a hill resort nestled amidst the towering hills. It is the natural beauty of the hill station that lures tourists from far and wide. A visit to its numerous monasteries, Pemayangtse, Rumtek, Labrang and Tasuk - la-khang (Palace Monastery), seem to satisfy your soul. You should also visit Deer Park, Namgyal Institute, Dul Dul Chortena, Keochalpari Lake, Tashi Viewpoint and Phurchachu Hot Springs. While in Gangtok, make sure to explore its rich flora and fauna.
Lakes
There are a few places in the world that give you as much peace and calm as a serene lakeside. Sikkim boasts of being home to a number of lakes, which impress you with their exotic locales and soothing quietude. Amongst the most visited lakes of the state are Cholamu Lake, Khecheoprai Lake, Green Lake, Tsomgo Lake, Samiti Lake, Menmecho Lake, Lakshmi Pokhari and Bidan Chu Lake.
Monasteries
Sikkim is one of the few states in India in which Buddhism is still flourishing. Standing as a proof of the fact are the numerous monasteries standing proudly within its boundaries. Though every monastery in the state is worth having a look at, the most popular and splendid ones are Rumtek, Pemayangtse, Tashiding, Sanga Choling, Tshukla Khang, Rinchinpong, Tholung, Enchey, Lingtam, Gangtok and Namchi.
Wildlife
If you have been to Sikkim and not explored its rich flora and fauna, your trip is as good as incomplete. You can hope to find some of the most exotic plants and animals in the forests surrounding the state. Fambong Lho Wildlife Sanctuary, Maenam Wildlife Sanctuary, Kyongnosia Alpine Sanctuary, Khangchendzonga National Park, Shingba Rhododendron Sanctuary and Barsey Rhododendron Sanctuary are a must visit, especially if you are a wildlife enthusiast.
Adventure Sports
After spending sometime with yourself, amidst the solitude offered by nature, it is the time to have some adrenaline rush. Going on adventure sports will be the ultimate thing, which will etch the trip to Sikkim in your memory forever. The opportunities offered by the state, in the form of river rafting, trekking, hand gliding, yak safari, mountain biking, mountaineering and archery, will be the perfect answer to you need for some excitement.
Best Time to Visit Sikkim
The splendid state of Sikkim experiences five seasons in a year, namely winter, summer, spring, autumn and monsoon. Amongst these seasons, it is only in summer and autumn when the weather conditions are at their best. Keeping this in mind, we can say that the best time to visit Sikkim comprises of the months of March to June and September to December.
Accommodation
In the last few years, Sikkim has started experiencing a boom in its travel and tourism industry. The result is opening up of numerous hotels and guesthouses, to cater to the great tourist rush. You will easily find four star and three stars hotels in Sikkim, which promises to make your stay as luxurious and comfortable as possible. For those who are looking for an economical stay, the deluxe hotels and budget hotels of Sikkim are the best bet.
How to Reach Sikkim
By Air
Sikkim does not have an airport of its own. However, Bagdogra Airport (West Bengal), around 124 km from Gangtok, caters to the tourists coming by air.
By Helicopter
Those who want to reach Sikkim in style can utilize the services of the helipad at BagdograAirport. The helicopter service is available once in a day.
By Rail
The nearest railway stations of Siliguri and New Jalpaiguri are situated at a distance of 114 km and 126 km respectively.
By Road

Sikkim can be entered through northern areas of West Bengal and has a good road network, connecting it with the rest of the country.