Sanjay Dutt is a famous Indian actor. Read this biography and know more about the childhood and profile of Sanjay Dutt.

Sanjay Dutt is a Bollywood superstar and is popularly known as a man with a golden heart. He is the son of Bollywood stars, Sunil Dutt and Nargis. He has acted in many films over the years. However, he was also sentenced to jail for 6 years for the illegal possession of firearms which he acquired from some of his acquaintances. Find out more about Sanjay Dutt's biography, profile and career, here in this article.

Early Life
Sanjay Dutt was born on 29 July, 1959 to actors Sunil Dutt and Nargis. He studied at the Lawrence School, Sanawar near a small town in Kasauli, Himachal Pradesh. He has two sisters, Priya Dutt and Namrata Dutt. He was just 12 years of age when he made his first ever appearance in a feature film, when he enacted a small role as a qawwali singer in the movie Reshma Aur Shera.
He was still in school when he got addicted to drugs and became a drug addict. It is widely believed that he took to drugs as he was unable to cope with the dual pressure of his studies as well as being a star, at the same time. With his drug problems, his mother's health also started to deteriorate and she was diagnosed with cancer.
Just a few weeks before Sanjay Dutt's first movie as a leading actor, 'Rocky' was about to release, she passed away. This made Dutt take to drugs more than ever before, as a result of which he had to be sent to the Texas rehab centre, in USA. After he attended the sessions at the rehabilitation centre, he was back to acting in films, again.
Career
Sanjay Dutt's first film as an actor was ‘Reshma Aur Shera’. He played a very brief role as a qawwali singer in this movie. But, his real break came with 'Rocky' which was Dutt's first ever movie in which he played the leading role as an actor. During the 1980s, Dutt acted in many movies which went on to become some of the biggest hits of all times. These films included names like 'Vidhaata' (1982), 'Naam' (1986) and 'Hathyar' (1989).
It is also believed that Sanjay Dutt was the first choice of director Subhash Ghai for his film 'Hero'. But, while shooting for the movie 'Vidhaata', when Ghai saw Dutt taking drugs, he picked Jackie Shroff in place of him. However, not the one to easily give up, he resurrected his film career with movies like 'Sadak' (1991) and 'Saajan' (1991). He even received his first ever nomination for the Filmfare Award for the movie Saajan. But, it was 'Khalnayak', which was released in the year 1993 which changed Sanju's professional life, for good. It was a huge hit and provided a real big boost to his career. He received a Filmfare nomination for 'Khalnayak' as well.
Unfortunately, just as 'Khalnayak' released, it coincided with his arrest by the Mumbai Police in connection with the 1993 Bombay Blasts. He was charged of illegal possession of arms and ammunitions, which were believed to be used in the blasts. According to various reports, it is known that on 16 January, 1993, gangster Abu Salem and his men came to Dutt's house and gave him three AK-56 rifles, 25 hand grenades, one 9mm pistol and some cartridges. Dutt passed on this arsenal of arms and ammunition to Hanif Kadawala and Samir Hingora, but kept one AK-56 rifle with himself. These rifles and cartridges are said to have been smuggled into India at the Dighi Port, on January 9, 1993.
Sanjay Dutt was shooting for a movie in Mauritius when he got to know that an arrest warrant has been issued on his name. Subsequently, he called up his friends Yusuf Nullawalla, Kersi Adjenia, Rusi Mulla and Ajay Marwah and asked them to destroy the AK-56 rifle. Sanjay Dutt was then arrested on 19 April 1993 and spent more than 18 months in the Arthur Road Jail, in Mumbai before he was released on bail.
It was on 28 November, 2006 that a TADA court found Sanjay Dutt guilty under the 'Arms Act' of possessing an illegal weapon. The next year, on 31 July, 2007, Dutt was sentenced to 6 years rigorous imprisonment by Judge P.D. Kode. A petition was filed by Sanjay Dutt's lawyer Satish Maneshinde, which was accepted by the Supreme Court on August 10, 2007. It was on August 20, 2007 that the Supreme Court granted him interim bail.
But barely two months later, on October 22, 2007, Dutt was back behind the bars again, where he spent 22 days before being released on regular bail on October 25 the same year.
Personal Life
Sanjay Dutt married Richa Sharma, in the year 1987 and a year later they were blessed with a baby girl, whom they named Trishala. Barely two months after Trishala was born, Richa was diagnosed with cancer as a result of which the couple separated. Richa moved to the United States with Trishala while Dutt continued to act in films.
It is known that his daughter is in the US and is pursuing Criminal Psychology. Currently, Sanjay Dutt is married to Manyata.. They were married on February 10, 2008 in Mumbai.
Awards and Recogniftions
Filmfare Awards
Star Screen Awards
International Indian Film Academy Awards
Global Indian Film Awards
Stardust Awards
Zee Cine Awards
Bollywood Movie Awards
Bengal Film Journalists' Association Awards
Other Awards 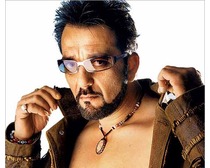