Robosapien V2, a next gen robot toy from WowWee, is a combination of technology & human traits. Find more on Robosapien V2 robot toy price and features. 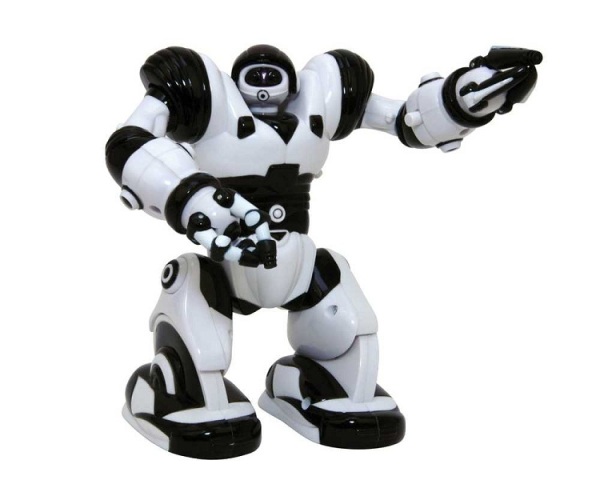 Manufacturer: WowWee
Height: 24 inches
Pre-Programmed Functions: 100
Suitability: 08 years and above
Robot Batteries: 6 “D” and 7 “AAA” (not included)
Controller Batteries:  3 AAA batteries (not included)
Price: 100 pounds
With Robosapien V2, WowWee has launched its next generation of robots. It is an upgraded version of the original Robosapien and is almost twice in size. The new Robosapien reflects an advanced combination of technology with human personality. The multi-sensory and interactive personality of the robot has been created with the latest technology and this is what makes it more endearing to the customers. The twenty four inches tall Robosapien V2 interacts with humans as well as objects, on multiple levels.
Sensory Awareness
Robosapien V2 has heightened senses. It can recognize the primary color objects as well as the different skin tones, through its basic color recognition camera sensor. The IR (infrared) vision of the robot enables detection and avoidance of obstacles, along with the tracking of moving objects. The robot can also follow a laser target, pointed at the floor or on a wall with the remote control. Its sonic sensors can easily detect loud sounds and it even reacts to the sounds around him. Robosapien V2 also has touch senses.
Human Robot?
Robosapien V2 can do humanoid body movements too. These include bending, sitting and standing, lying down and getting up, dancing, waving, martial arts, etc. It can also produce burp and fart sounds. It has articulated fingers that help in the having a grip over objects. The 2-axis turning head of the robot comes has animated LED eyes and looks almost real. Robosapien V2 moves through bi-pedal walking and has a number of gaits. The articulated waist, shoulders, and hands give him multiple body animations.
Want to Know More?
Robosapien V2 comes loaded with numerous sayings and animations, which can be activated with the remote control. Some of these pre-recorded phrases are relevant to his different behaviors. In the free roam mode, the robot explores its environment, while scanning it with the infrared sensors. It can also interact with the Robopet and Roboraptor robots for a short time, if you start the progression from the remote control. Robosapien V2 is suitable for kids over 8 years of age and comes at a price of 100 pounds.
Main Features of Robosapien V2
How to Cite