Orlando has number of tourist attractions but it is best known for the Walt Disney World. Read more about things to do and places to see in the amazing city of Orlando.

Language: English
Weather: Warm and Humid Subtropical
Population: 2,633,282 (2006)
Driving Side: Right
Emergency: Call911 for any emergency
Best Time To Visit: September to March
Main Attractions: Walt Disney World, Downtown Disney, Epcot Center, SkyVenture Orlando, Magic Kingdom, Harry P. Leu Gardens etc.
Loaded with fun attractions, Orlando, a major city in Central Florida, can be aptly called the fun capital of America. This sixth largest city of Florida is also the county seat of Orange County. Orlando confines the dream destination of perhaps every child all thanks to the Walt Disney World Resort. This enticing conurbation is literally thrived with attractions, then be it theme parks, museums, restaurants, shopping malls, parks & gardens, art galleries, golf clubs, or ethnic enclaves.
Where Walt Disney woos the kids, both young and old, love to caress their stimulating nerves at the Universal Orlando Resort and the plush golf courses. Down to its lovely sites, tourists from worldwide could not resist themselves to visit this persuasive city, and probably that’s why, it receives approximately 52 million tourists every year. Not only this, Orlando is amongst the busiest cities for conventions, which boasts of having the second largest number of hotel rooms in the U.S.A.
Places to See in Orlando
Discovery Cove
Discovery Cove is a theme park located just adjacent to SeaWorld in the southwest of Orlando. Here, you will have the opportunity to check out a variety of marine animals, especially bottlenose dolphins. Operated by the Busch Entertainment Corporation, it is a place where you can actually swim with dolphins. Moreover, Discovery Cove is characterized by its exotic birds, tropical fishes, rays and land mammals.
Walt Disney World
Undoubtedly, Walt Disney World Resort is a must place to head for in Orlando. It contains four theme parks, two water parks, twenty-three hotels, and several entertainment, recreation, dining and shopping venues, being a complete destination in itself. Such huge variety of attractions makes it the world’s most visited recreational resort. Walt Disney World is located near Lake Buena Vista, about 32 kilometers from downtown Orlando.
World of Orchids
To live the experience of tropical rainforests, the World of Orchids is an amazing place that one should definitely visit. In a natural jungle setting, here you can witness no less than 1000 types of orchid. This greenhouse boasts of controlled climate that is apt for orchids to bloom, together with streams, waterfalls, and squawking parrots. So, get ready to take a long boardwalk scrolling through nearby wetlands at the World of Orchids.
Orlando Museum of Art
The Orlando Museum of Art has an exquisite collection of portraits, paintings, sculptures, photography etc, dating back to centuries. Here you can see amazing paintings depicting different phases of American art, including Neoclassicism, Impressionism and Modernism. Moreover, you can also fix your eyes on the selection from the Ancient Americas Collection that gives insight into the lives of people lived during early centuries.
Universal Orlando Resort
Universal Orlando Resort is a theme park resort that comprises two theme parks, the Universal Studios Florida and the Universal's Islands of Adventure. Besides theme parks, if you’re a party lover, the best place to explore is the Universal CityWalk. After the Walt Disney World Resort, this is the second largest resort in Orlando. One can here find everything, ranging from entertainment, dining, shopping, recreation, picturesque locations to high-tech settings.
Things to Do in Orlando

Whether you are with kids, family, friends or alone, visiting the Walt Disney World Resort is a must see place, when on a tour to Orlando. Not only will you feel like a kid again, but can also rejuvenate yourself at the numerous recreation venues there. The nature lovers must make sure to visit the Disney Cove, the place where you get to see the best of nature. At the same time, make sure to eat at CityWalk theme restaurants, enjoy rides at Universal's Islands of Adventure and watch the performance of Blue Man Group at a theater in Universal Orlando. 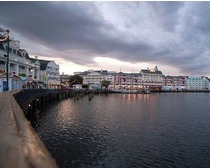