Do you want to know about the stages that a butterfly goes through, as a part of its life cycle? If yes, then go through this article and explore the four life stages of a butterfly.

Butterfly, one of the most beautiful creations of God, charms almost each and every person in this world. Now, who doesn’t like a colorful butterfly flying around the flowers in his/her garden? While many people appreciate the beauty of the creature, very few of them know or even wonder exactly how does it grow up to be so pretty. Are you one of them? Would you like to explore the life stages of a butterfly right now? If yes, then you will surely find the following lines to be worthy of a thorough read. 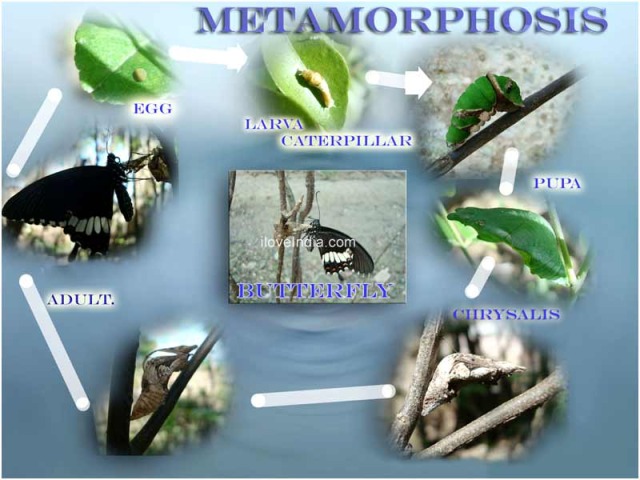 Life Cycle Of A Butterfly
The life cycle of a butterfly has it going through four stages, each of which has been mentioned in the lines below.
Egg
The first stage in the life cycle of a butterfly comprises of being an egg, which has a hard-ridged outer layer as its shell, called the chorion. The outer layer of a butterfly egg is coated with a thin layer of wax, which has the aim of preventing the former from drying out before the larva has developed fully. Either spherical or ovate in shape, a butterfly egg has numerous tiny funnel-shaped openings, called micropyles, at one of the ends. Eggs are usually laid on host-plants, which might be limited to just one species of a plant or expand to include a range of plant species, even comprising of the members of a common family. In majority of the cases, the egg stage of a butterfly lasts for a few weeks only.
Caterpillars (Larva)
The larva stage of a butterfly, in which it is commonly known as a caterpillar, is mainly spent in search of food, primarily comprising of plant leaves. However, in some of the species, the caterpillars might eat insects as well. In this phase, a butterfly matures to quite an extent, through a series of stages called instars. It is the last instar in which a caterpillar starts developing wing disks on the second and third thoracic segments. It is near pupation that the wings are forced outside the epidermis, under pressure from the hemolymph. Caterpillars have three pairs of true legs from the thoracic segments and up to 6 pairs of prolegs, with rings of tiny hooks called crochets, arising from the abdominal segments.
Pupa (Chrysalis)
As the larva stages starts coming to an end, the caterpillar starts producing hormones, such as prothoracicotropic hormone (PTTH), and stops feeding. It begins a search of an appropriate site for pupation, which (more often that not) comprises of the underside of a leaf. The caterpillar anchors itself to a substrate and moults (for the last time), as it transforms into a pupa (or chrysalis). In most of the cases, a pupa is incapable of movement, except a few species in which it can move abdominal segments or produce sounds to scare potential predators. In this stage, the wings of a butterfly; compressed from top to bottom and pleated from proximal to distal ends, undergo rapid mitosis and absorb lots of nutrients.
Adult (Imago)
The last stage in the life cycle of a butterfly is known as the adult stage, where it attains sexual maturity and becomes an imago. As soon as it enters the stage, the butterfly has to unfold the wings, contracted in the pupa stage. So, it spends sometime in inflating them with blood. Thereafter, it has to let them get dry, a process that can take anywhere between one and three hours. During this time, it is extremely vulnerable to predators. By the end of it, a butterfly has four wings covered with tiny scales, with the fore and hind-wings no longer hooked together. Majority of the butterflies have six legs, with the exception of the nymphalids, in which the first pair is reduced.
How to Cite