'Hari Puttar' is a comedy movie centering on two kids. Go through this review and explore the star cast & music of film 'Hari Puttar'. 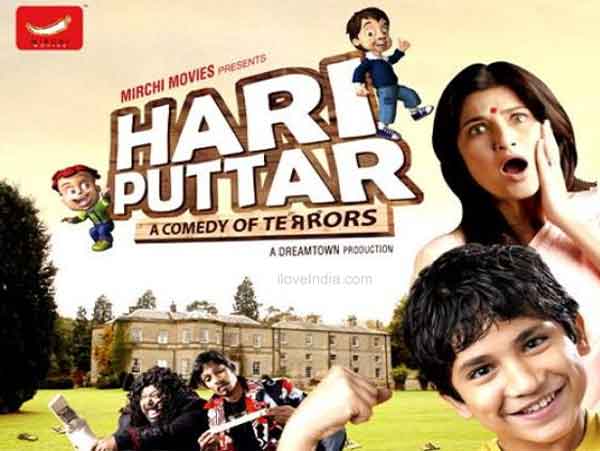 
'Hari Puttar' is not a copy of 'Harry Potter'! So, this statement is true. Now, the twist is that it is an imitation, actually poor imitation, but of 'Home Alone', an English movie starring Macaulay Culkin. One word for the movie - "pathetic", right from the story to the performances! Why would anyone want to make or even act in such a lousy movie is a question that we still haven't figured an answer to. There are loads of flaws in 'Hari Puttar'.
First, its script is not original. Second, it is a dreadful copy of Home Alone. Third, the so-called rogues in the movie looked more like buffoons. And…the list goes on. What was Shamita Shetty doing in a kiddie film, shaking sexily to the promotional track? In fact, why were there any songs at all? Coming down to performances, how did Lucky Kohli manage to get such a dismal performance from Swini Khara, the same girl who won our hearts in 'Cheeni Kum'!
As for Zain Khan, he desperately tries to carry the awful movie on his shoulders, but fails miserably. He is not a bad actor, but with a script like this, what could you expect? Sarika looked disinterested, Lilette Dubey was miscast, Jackie Shroff was another dampener, while Saurabh Shukla and Vijay Raaz were looking lost. 'Hari Puttar' is a 'Comedy of Terror' (its tagline) right, because you feel terrorized the moment you watch the so-called 'comedy flick'.

Hari Puttar Pre-release Review
After being overloaded with grownups slapsticks, a comedy featuring two kids is likely to come as a lucky break for you. We are talking abut 'Hari Puttar', a kiddie film all set to be released on 19th September 2008. Apart from the child artistes Zain Khan and Swini Khara, the movie also has stars like Sarika, Jackie Shroff, Saurabh Shukla, Vijay Raa and Lillete Dubey. It has been directed by Rajesh Bajaj and Lucky Kohli, with Guru Sharma and Aadesh Shrivastava being the music directors and Sameer, the lyricist.
Lucky Kohli, Munish Puri and A. P. Parigi, the producers of 'Hari Puttar - A Comedy of Terrors', will be releasing it under the banner of 'Mirchi Movies Limited'. The movie revolves around two kids Hari Prasad Dhoonda (Zain Khan) and Tuk Tuk (Swini Khara) who save their house from a couple of goons. Hari is a 10 year old who has recently moved to UK from India, with his parents - Prof. Dhoonda (Zakir Khan) and his wife (Sarika). Dhoonda has been appointed to work on a secret project with the Defense Forces, at a remote location in UK.
He has been provided with some confidential information, which is stored in a chip and kept at his house. After Hari and his family arrive in UK, they are visited by his aunt (Lilette Dubey) and uncle DK (Jackie Shroff). However, they have not come alone, rather with their kids as well as DK's boss' children. Now, there are 10 children in the house. To Hari's chagrin, he is thrown out of his room, to accommodate the girls. If that wasn't enough, he is also ragged and mocked by the other kids, for his naivety and immaturity.
DK arranges a vacation for the entire family. The night before they have to leave, Hari's mom sends him off to the attic bedroom, as a punishment, even though he has done nothing wrong. Early next morning, the entire family leaves for the vacation, forgetting to take along Hari and his little cousin Tuk Tuk. To top it all, they realize their mistake only halfway into their journey. Hari and Tuk Tuk, finding the entire family gone and having the large house to themselves, become ecstatic and start enjoying their new-found freedom.

The joy of the two cousins, however, is short lived. Unknown to them, Kali Mirchi - a notorious don, sends two clumsy burglars (Saurabh Shukla & Vijay Raaz) to steal the secret formula chip from the house. Merely by accident, Hari comes to know of this and, along with his cousin Tuk Tuk, makes a plan to save the chip. What follows is a hilarious sequence of events, in which Hari tries to outwit the burglars. In the meanwhile, Hari's mother, realizing her mistake, returns to her house, midway through the journey. As she comes back, she finds her son, not a naïve boy, but a hero who has captured the burglars who tried to rob his house.