Barbara McClintock’s biography reflects a brave woman who stood firm against false societal ideologies to earn a position in the scientific world through her great and controversial discoveries. 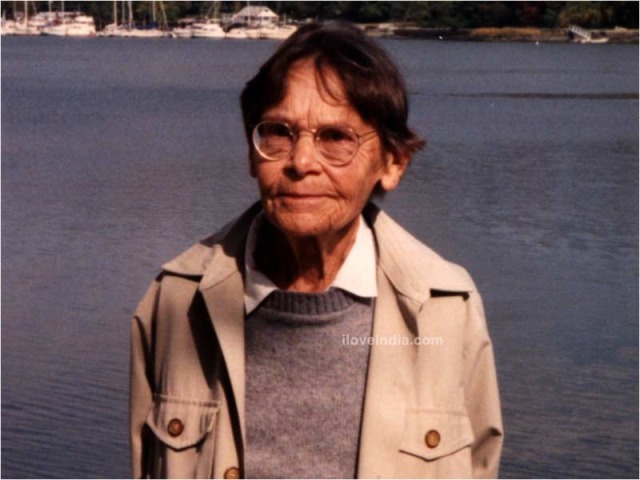 Born In: Hartford, Connecticut, USA
Died On: 2nd September, 1992
Career: Scientist and renowned cytogeneticist
Nationality: American
Barbara McClintock was a famous scientist and the most distinguished cytogeneticist of America. Barbara’s lifelong achievements in genetics are so notable and talked about because it was after her bold step to study medicine that the biased society of America saw some change. Until then, scientific research was considered to be beyond the pale of women. Even if a woman showed exceptional talent and interest in science and mathematics, the option to pursue her talent as a scientist was almost always denied in comparison to the conventionally more favored roles such as those of a mother, wife and a homemaker. But, a few examples like that of the pioneering scientist Barbara changed the thought processes and outlook of American society. Barbara McClintock had to struggle her way to position and fame. She was a renowned figure in the field of science and her expertise and talent earned her the Nobel Prize in Physiology in the year 1983, for her theory of ‘genetic transposition’. Read about the profile, childhood, life and timeline of the great personality, Barbara McClintock, for a better understanding of her persona.

Childhood
Barbara McClintock, the third of the four children of physician Thomas Henry McClintock and Sara Handy McClintock, was born on June 16, 1902, in Hartford, Connecticut. From the time she was three years old, Barbara lived with her aunt and uncle in Brooklyn, New York, till she joined school, in order to reduce the financial burden on her parents. Barbara as a child was quite independent and tomboyish by nature.

Early Life
Barbara McClintock was introduced to the subject of science in her high school and wanted to attend Cornell University for higher studies. However, this proposal was put down by her mother, who thought that education would dampen her daughter’s marriage prospects. But Barbara’s father came to her rescue and she joined Cornell in 1919. She took up botany and received her B.Sc. in the year 1923. Barbara, during her study in Cornell University, took up a course in genetics in 1921, completely mesmerized by this field of study. The course was taught to her by C.B. Hutchison, who invited Barbara to participate in the graduate genetics course in 1922, after getting impressed by her interest in the field.
Research And Achievemnts
During her studies, Barbara constituted.a group of plant breeders and cytologists including Charles R. Burnham, Marcus Rhoades, George Beadle, and Harriet Creighton, to study the new field of cytogenetics in maize. Their research focused on developing ways to visualize and characterize maize chromosomes. The research was able to determine for the first time the morphology of the ten maize chromosomes. Barbara McClintock became the first person to describe the cross-shaped interaction of homologous chromosomes during meiosis, in the year 1930. She published the first genetic map of maize in 1931 that showed the order of 3 genes on maize chromosome 9. This served as necessary data for the crossing over study that she published along with Creighton. She also produced a cytogenetic analysis of a centromere, describing its organization and function. Barbara was awarded several post-doctoral fellowships from the National Research Council because of her publications and support from colleagues. These funds allowed Barbara to continue her studies on genetics at Cornell, the University of Missouri and the California Institute of Technology, where she worked along with E.G. Anderson. She also worked at Missouri with geneticist Lewis Stadler in the summers of 1931-32. Lewis introduced Barbara to the use of X-rays as a mutagen. This introduction helped her identify the ring chromosomes which form when the end of a chromosome fuses together after the damage because of radiation.

Barbara got an opportunity to attend a training session for a period of six months in Germany because of a fellowship given to her by the Guggenheim Foundation. She worked in Germany along with geneticist Richard B. Goldschmidt. But she had to leave the country before the completion of the fellowship because of the mounting political tensions in Europe. She returned to Cornell and remained a part of the university until 1936, when she accepted the post of an Assistant Professor in the Department of Botany at the University of Missouri, Columbia, offered to her by Lewis Stadler.

University Of Missouri
Barbara expanded her research about X-rays on maize cytogenetics, in Missouri. Even though her research was progressing, Barbara was not satisfied with her position in the University. She believed that she would not gain any tenure at Missouri, and therefore took leave from the University in order to find a new position elsewhere. She accepted a visiting Professorship at Columbia University, where her former Cornell colleague Marcus Rhoades was a professor and who offered to share his research field at ‘Cold spring Harbor’ on the Long Island. In December 1941, Barbara McClintock was offered a research position at the Carnegie Institute of Washington Department of Genetics Cold Spring Harbor Laboratory. This place brought out the potential of Barbara in the real sense. She continued on her work with the breakage-fusion-bridge cycle, using it to substitute X-rays as a tool for mapping new genes. She was elected to the National Academy of Sciences, for her expertise in the field of genetics, making her only the third woman to be so elected. In 1945, she became the first woman president of the Genetics Society of America. George Beadle invited Barbara to Stanford to undertake a study, which made her successfully describe the number of chromosomes of N. crassa and also the entire life cycle of the species.
Discovery Of Controlling Elements
In 1944, Barbara started the study on the mechanisms of the mosaic color pattern of maize seed and its unstable inheritance. In the process she identified 2 new dominant and interacting genetic loci that she named as Dissociator and Activator. In 1948, she made a discovery that both Dissociator and Activator were able to change positions on a chromosome. She also developed a theory by which these mobile elements regulated the genes by modulating their actions. She referred to her work on Ac/Ds and her ideas on gene regulation in 1950, in a paper titled "The origin and behavior of mutable loci in maize" which she presented at the annual conference at Cold Spring Harbor Laboratory, in 1951. Her work was not easily understood and accepted by people. However, Barbara McClintock continued her research on the ideas on controlling elements. She published a paper on genetics in 1953 with all her statistical data. She also took lecture tours all through the 1950s to speak about her work. However, the reactions of  scientists to her work discouraged her from publishing accounts of her research on controlling elements.
The Origins Of Maize
The National Science Foundation and the Rockefeller Foundation sponsored Barbara McClintock to start research on Maize in South America, an area with several maize varieties, in the year 1957. Barbara explored the chromosomal, morphological and evolutionary characteristics of various varieties of maize. She also supervised four scientists working on South American maize in North Carolina State University in Raleigh, from 1962.
Rediscovery Of Controlling Elements
Barbara McClintock retired officially from her post at the Carnegie Institution in 1967 and was made a Distinguished Service Member of the Carnegie Institution of Washington. This helped her continue working with graduate students and her colleagues in the Cold Spring Harbor Laboratory.
The importance of Barbara’s contributions came to light only when the French Francois Jacob and Jacques Monod’s work in 1960 described the genetic regulation of lac operon, a concept that Barbara had demonstrated with her Ac/Ds in 1951. Barbara wrote an article for the American Naturalist comparing her work on controlling elements and the lac operon in maize.

Honors And Recognition
Barbara McClintock was awarded the National Medal of Science by President Richard Nixon in the year 1971. Cold Spring Harbor honored her by naming one of the buildings after her in 1973. She became the first recipient of the MacArthur Foundation Grant in 1981, and was honored with the Albert Lasker award for basic medical research, the Wolf Prize in Medicine and the Thomas Hunt Morgan Medal by the Genetics Society of America. She was awarded the Louisa Gross Horwitz Prize from Columbia University for her research in the "evolution of genetic information and the control of its expression” in 1982.

Most notable of all recognitions, Barbara McClintock was awarded the Nobel Prize for Physiology or Medicine in 1983, for her discovery of "mobile genetic elements”. She was honored by 14 doctorate degrees, and in 1986, she was inducted into the National Women's Hall of Fame.

Personal Life And Death
There is not much said about her personal life, except that she never married or had children. Barbara McClintock died in Huntington, New York, on the 2nd of September, 1992, at the age of 90.
Timeline
1902: Barbara McClintock was born
1919: Barbara joined the University of Cornell
1921: She took up a course in Genetics in the University of Cornell
1922: C.B. Hutchison invited Barbara to participate in the graduate genetics course
1923: She graduated with a B.Sc. degree from Cornell
1930: Barbara became the first person to describe the cross-shaped interaction of homologous chromosomes during meiosis
1931: She published the first genetic map of maize
1931-32: She also worked at Missouri with geneticist Lewis Stadler
1941: She was offered a research position at the Carnegie Institute of Washington’s department of genetics Cold Spring Harbor Laboratory
1944: She started the study on the mechanisms of the mosaic color pattern of maize seed
1945: Barbara became the first woman president of the Genetics Society of America
1950: She referred about her work on Ac/Ds and her ideas on gene, in a paper titled "The origin and behavior of mutable loci in maize"
1951: She presented the paper at the annual conference at the Cold Spring Harbor Laboratory
1957: The National Science Foundation and the Rockefeller Foundation sponsored Barbara McClintock to start research on Maize in South America
1967: Barbara McClintock retired officially from her post at the Carnegie Institution
1971: McClintock was awarded the National Medal of Science
1973: Cold Spring Harbor named a building after her
1981: She became the first recipient of the MacArthur Foundation Grant
1982: She was awarded the Louisa Gross Horwitz Prize from Columbia University
1983: Barbara McClintock was awarded the Nobel Prize for Physiology or Medicine
1986: She was inducted into the National Women's Hall of Fame
1992: Barbara McClintock died in Huntington, New York
How to Cite