Get reviews on TVS Flame 125 CC bike from the TVS motors India. Also find its price/cost and specifications.

The latest launch from the TVS pavilion and perhaps the hottest till now is the TVS Flame. This bike has been in the eye of the storm ever since Baja filed a case against TVS claiming that they had stolen the Bajaj patented DTS-I technology and used it for Flame. However, now since everything has been settled, the 125cc Flame has been launched in the Indian automobile market and all those who had planned to buy this bike long back can now do it. The bike is priced at around Rs. 45, 000 (ex-showroom Chennai). 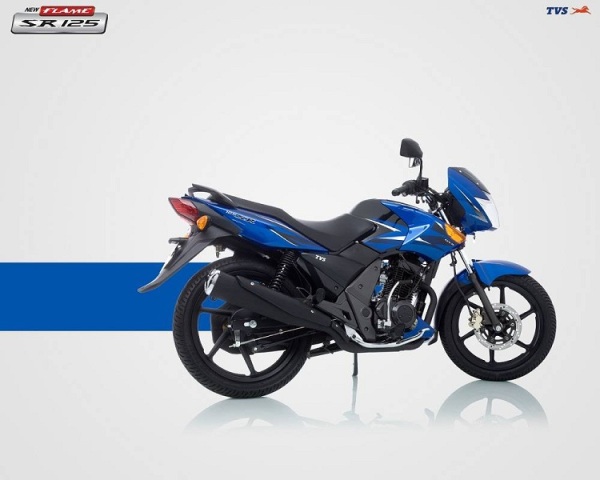 Features and Design
The TVS Flame has been designed to capture attention in one go. The bike has been given a contemporary urban look by having a black theme. Much of its features like headlamp, front fender, attractive rear view mirrors, body colored shock absorber springs and special engine cowl are designed like the Apache. A triangular design theme has been adopted for this bike, which is found in fighter jets. Other attractive features of the Flame include alloy wheels, disc brake at the front, electric start and handle bar weights to control vibrations. The 125cc Flame also boasts of styling elements such as LCD digital speedometer, dual lens tail lamp and a Deltaedge exhaust. Flame’s sporty Deltaedge exhaust is not just for styling but also to deliver a smooth sound, low emission and excellent performance.
Engine and Mileage
A new sophisticated engine has been developed for the TVS Flame. In fact, this sleek bike supports the first three-valve CC VTi engine in India. The maximum power produced by this engine is 10.5 bhp at 8,250 rpm while the torque is 10 Nm at 6250 rpm. This engine has two different in take ports, swirl and power port. A swirl motion is created of the intake air-fuel mixture in the combustion chamber, which leads to efficient burning of lean air-fuel mixture and helps improve the bike’s fuel efficiency. The power port opens to allow a high flow rate of the air-fuel mixture to deliver high power in the power throttle mode. The bike gives a mileage of around 65 km/l on road and performs quite well in heavy traffic conditions.
Technical Specifications
How to Cite