Sony Ericsson K-850i is one of the latest phones in the market of mobiles. Read further to know the review and technical specifications of the K850i.

Sony always comes up with all new phones that guys love to fondle. K850i is another masterpiece that has joined the K-series and the family of camera phones by Sony. Its layout can be basically described as evolution of the earlier Cyber-Shot phones, where its display boasts of 2.2 in screen, a bit larger than K810i. Besides some additions, like Media Centre and three-touch sensor soft-menu keys, anyone familiar to Sony phones would find the K850i easy to use because the handset, menu layouts and graphics are approximately same.

Design
Measuring at 10.2 x 4.8 x 1.7cm, the K850i cell phone also brags of superior plastic quality, however, its glossy case develop smudges and fingerprints. You will probably find its keypad similar to that of T650i, but its individual keys are actually brighter. ‘D-pad’, a four-way oblong control that forms part of the keypad and includes the 2 and 5 keys, is absolutely new to user interface of Sony Ericsson. This 118 grams phone is available in two colors - Luminous Green and Velvet Blue. Its 5MP Camera is placed strategically to capture amazing quality pictures.
Features
When it comes to features, this comprehensive  mobile phone has all, including HSDPA 3G, EDGE, GPRS, FM radio, Bluetooth 2.0 and A2DP wireless stereo playback. With this you get 40MB integrated storage, and you can extend it up to 4GB though the card slot will require either Memory Stick Micro (aka M2) or Micro SD. To manage music, display videos and pictures, the K850i is installed with an all-in-one media player which is user-friendly. It will not only support MP3, AAC, WMA and MPEG 4, but also can be accessed directly from the Media Centre key, next to the Answer key.
Technical Specifications 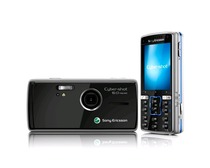